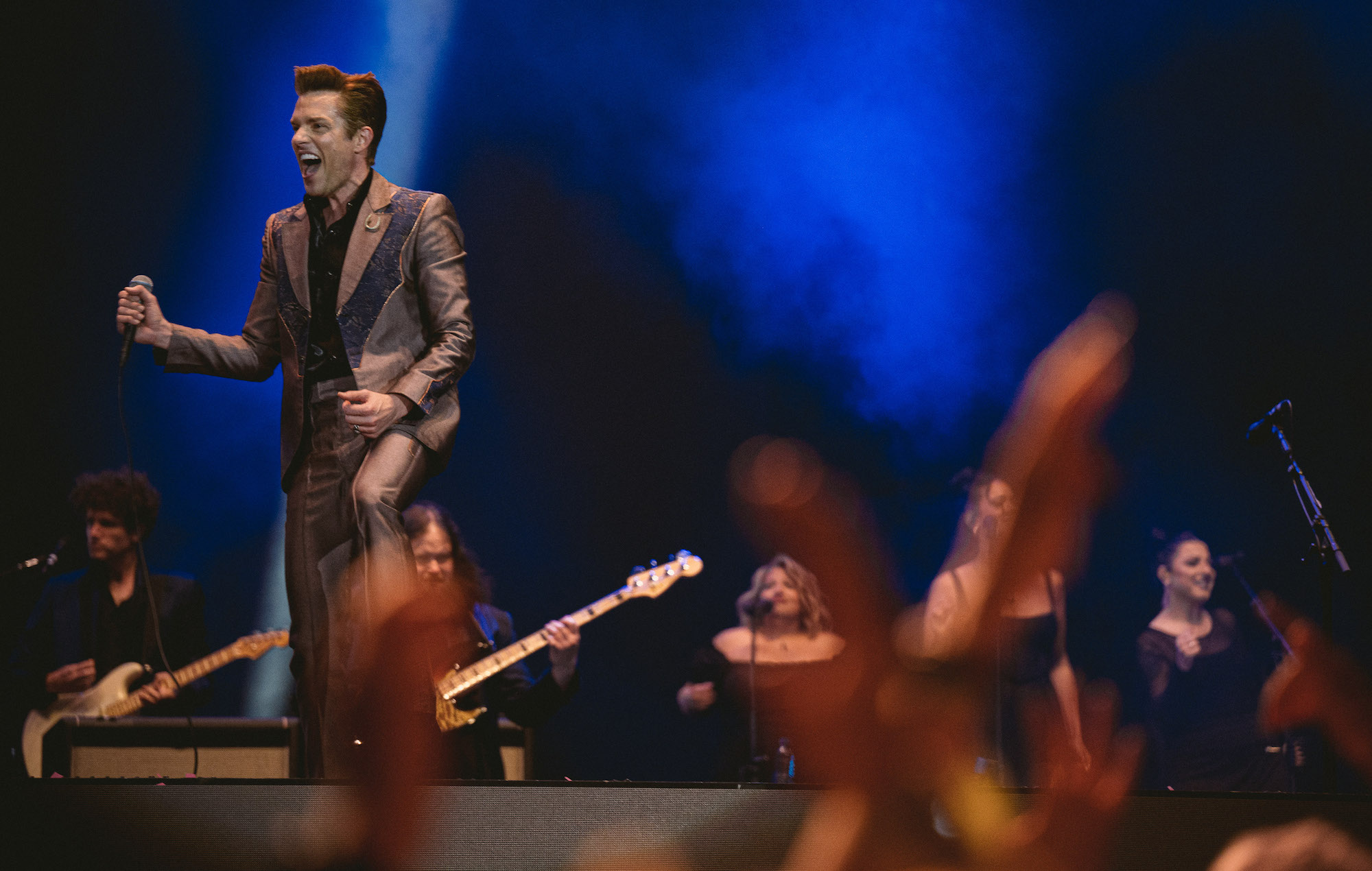 The final day of Open’er 2022 is a bright one, whether because of the sun that blesses the disused Gdynia-Kosakowo Airport site or – once that great ball of fire has set – because of the glowing neon art installations dotted around the site. In the middle of the field that connects the main stage with the smaller tents is a totem of fluorescent shapes that looks like a more abstract, singular version of Las Vegas’ Seven Magic Mountains. Next to the Beat Stage, an otherwise drab tunnel is lit up in the colours of the rainbow, giving its grey concrete a vibrant makeover.

The music that pours out of every stage today is just as vivid. On the Alter Stage, Polish rapper Szczyl draws a big crowd early on with a set that veers from anthemic hip-hop bangers driven by an indie base, to more introspective cuts. Later, on the same stage, Cate Le Bon creates a very different atmosphere. Dressed in a chainmail headpiece and floaty red-and-black garb, the Welsh musician puts the tent into a serene trance with the likes of ‘Moderation’ and ‘Daylight Matters’. “Thank you for being here with us,” she says before a gently bouncing version of ‘Running Away’ sweeps over the PA, but it’s Le Bon and her band who deserve the gratitude for such an idiosyncratic, beautiful performance.

The main stage, meanwhile, has turned into a big party zone. With The Chemical Brothers forced to pull out from their late-night set as they and their crew still struggle with COVID-19, the line-up has been rejigged with Peggy Gou drafted in to get things going in the evening. In tribute to the electronic heroes, she drops ‘Hey Boy Hey Girl’ mid-set, giving festival-goers a taste of what could have been. There’s no time to be sad, though – her set effortlessly moves from banger to banger, the Korean DJ conducting the crowd with a simple but assured wave of her hands each time the drop hits. There are also surprises aplenty within her selections – not least when she remixes a snippet of Wet Leg’s ‘Too Late Now’ into a hypnotic club track.

Shortly after Gou packs up her decks, The Killers take on the challenge of being the festival’s final headliner for this year. That they would nail the job – and do so in style – was never in doubt; the Las Vegas band long having proved their mettle as some of modern music’s best live performers. Tonight only reinforces that reputation as they deliver one of the slickest, showiest sets of the week. They walk on stage to the synth drones from the start of ‘The Man’, launching into the cocksure anthem the second frontman Brandon Flowers leaps onto one of the monitors and a canon of pink confetti explodes over the crowd. “Hello Poland, we’re The Killers and we’re brought to you by way of fabulous Las Vegas, Nevada,” the singer tells the crowd as the song comes to an end, as if the band need any introduction.

What follows is a setlist packed with hits, curated from a catalogue that’s rife with massive tunes. Latter-day Killers material doesn’t get a look in, its often slower, more thoughtful form at odds with tonight’s attitude of putting the pedal to the metal and keeping things at a constant high. Instead, we’re treated to some of The Killers’ biggest and best-loved songs – ‘Somebody Told Me’, ‘Spaceman’, ‘When You Were Young’ and many more.

Between songs, Flowers addresses the crowd in as much Polish as he can remember (or read off a sheet taped to the stage). His fondness for the country is palpable, not least when he halts ‘All These Things That I’ve Done’ in its opening lines to pay tribute to its people. “Before we came out here tonight, the US Ambassador for Poland told us how you’re taking in the Ukrainian refugees and it touched our hearts,” he says. “Keep doing what you’re doing, it’s a beautiful thing and we had no idea about it until tonight. We could all take a lesson from Poland on how to behave.”

It’s an emotional moment that can be felt through the end of the set, which arrives just three songs later. After a version of ‘Mr. Brightside’ that’s accompanied by purple and green lasers and begins in electro style before bursting into its more typical form, drummer Ronnie Vannucci Jr jumps down from his riser and comes to the front of the stage. The rest of the band are long gone, but he sticks around to survey the crowd. “We love you Poland,” he says sincerely. “Thank you very much for giving us this job and this opportunity to come and play for you.” He swings the mic stand to the floor, giving Open’er 2022 a perfect end – a triumphant mic drop on a brilliant return.

The post Open’er Festival 2022 day four: The Killers and Peggy Gou close the party in style appeared first on NME.